Survey: Finance Questions You Should (and Shouldn’t) Ask

Everyone knows there are certain subjects you just don’t bring up in conversation, whether it’s religion, politics, or marital conflicts. But if there’s one thing Americans can agree on, it’s that money is the most taboo topic of all. Asking about salary or diving into details about debt is just not a casual conversation anyone wants to be a part of.

While there is a time and a place for everything, does the same always apply to money? Which financial questions are appropriate to ask, and who are people most comfortable talking money with? We surveyed over 980 employed people who currently owned or rented their homes to get a better idea about the boundaries of financial discussions. It’s time to talk about money—read on to see what people had to say.

What can you ask? 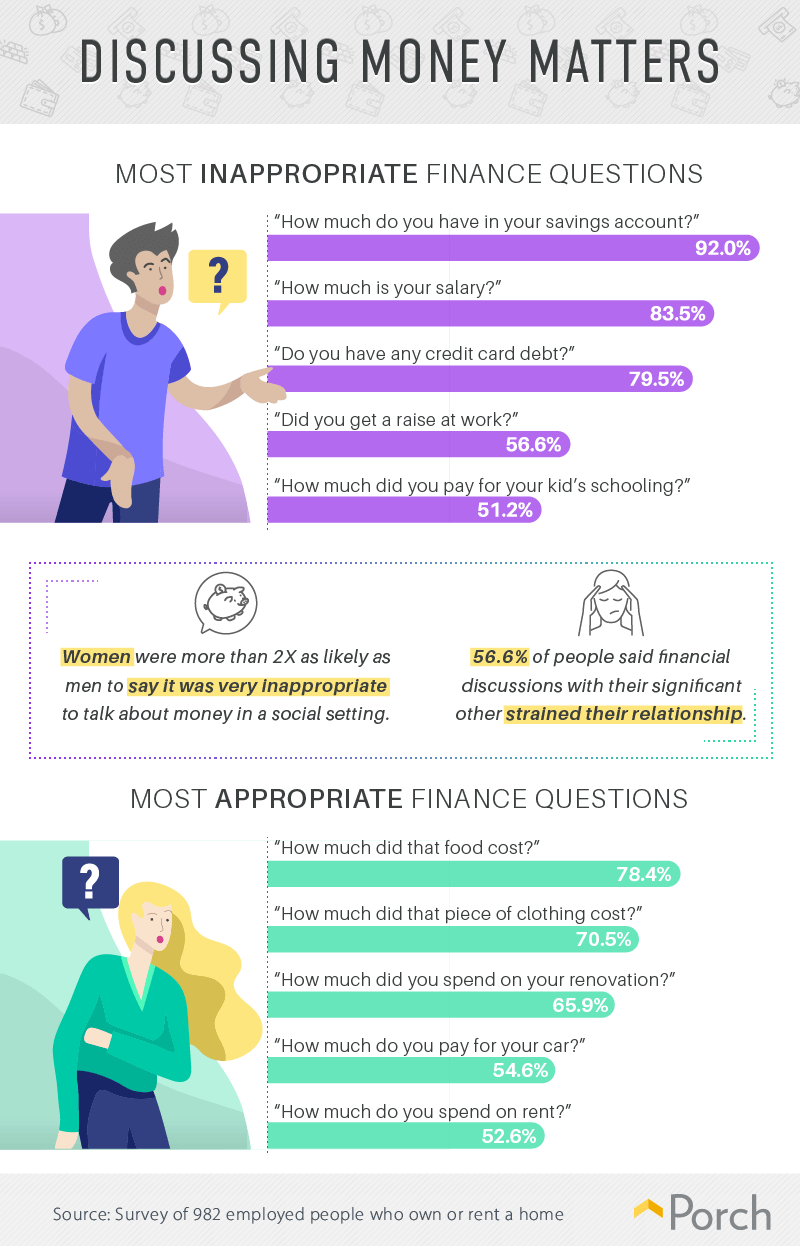 Talking about money is obviously tricky, but not talking about money can also have repercussions—to our health, wealth, and happiness. There are some questions, though, that people should steer clear of, at least according to our respondents. Asking how much money someone has in his or her savings account was perceived as the most inappropriate (92 percent), along with asking about salary (83.5 percent). Meanwhile, around half of respondents thought it was inappropriate to ask about the amount paid for a child’s schooling.

Even when it comes to discussing finances with a significant other, 56.6 percent of people said it strained their relationship. Not only is money a leading cause of stress in relationships, but it’s also one of the most cited reasons behind divorce. While asking about salary and credit card debt may be necessary when cohabiting, starting a family, or thinking about marriage, it might be better to stick with easier financial questions at the beginning of a relationship.

On the other hand, the majority of respondents said asking about the cost of food, clothing, or renovations didn’t cross the line. However, when it came to asking how much someone paid for their car or how much they spent on rent, people were nearly split. While 54.6 percent of people thought asking about the price of a car was appropriate, 52.6 percent said the same about rent.

Dealing with your landlord 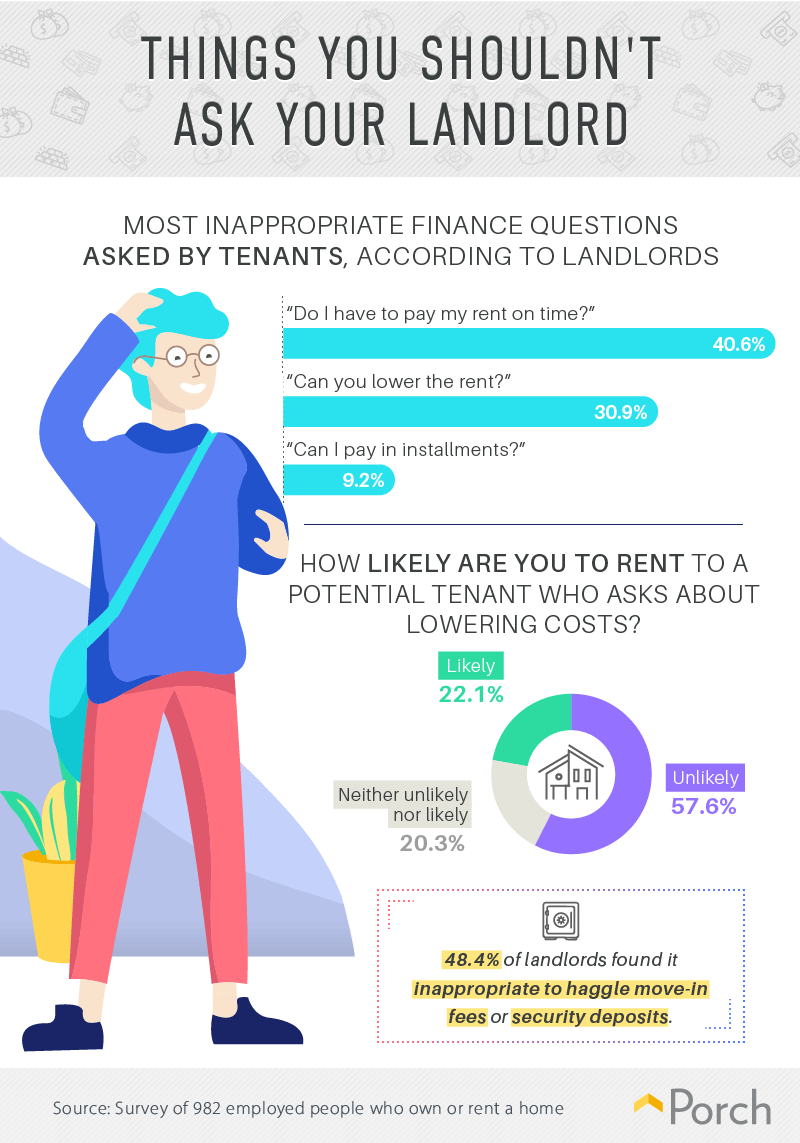 Of course, what you ask often depends on whom you’re asking. The relationship between renter and landlord may heavily revolve around money, but asking if you have to pay your rent on time is a conversation most landlords don’t want to have. On the other hand, asking to lower the rent might be a little bit more acceptable. While 40.6 percent of landlords said the most inappropriate question a tenant could ask was about paying the rent on time, 30.9 percent said asking to lower the rent was also inappropriate.

Asking to lower the rent may seem like a typical negotiation tactic, but nearly 60 percent of landlords said they were unlikely to rent to a potential tenant who asked about dropping the price. And considering roughly half of landlords believed it was inappropriate to haggle move-in fees or security deposits, it may be more beneficial to ask about paying in installments—only 9.2 percent of landlords thought that question was inappropriate, and playing it safe may boost the chances of landing a lease.

Asking in the workplace 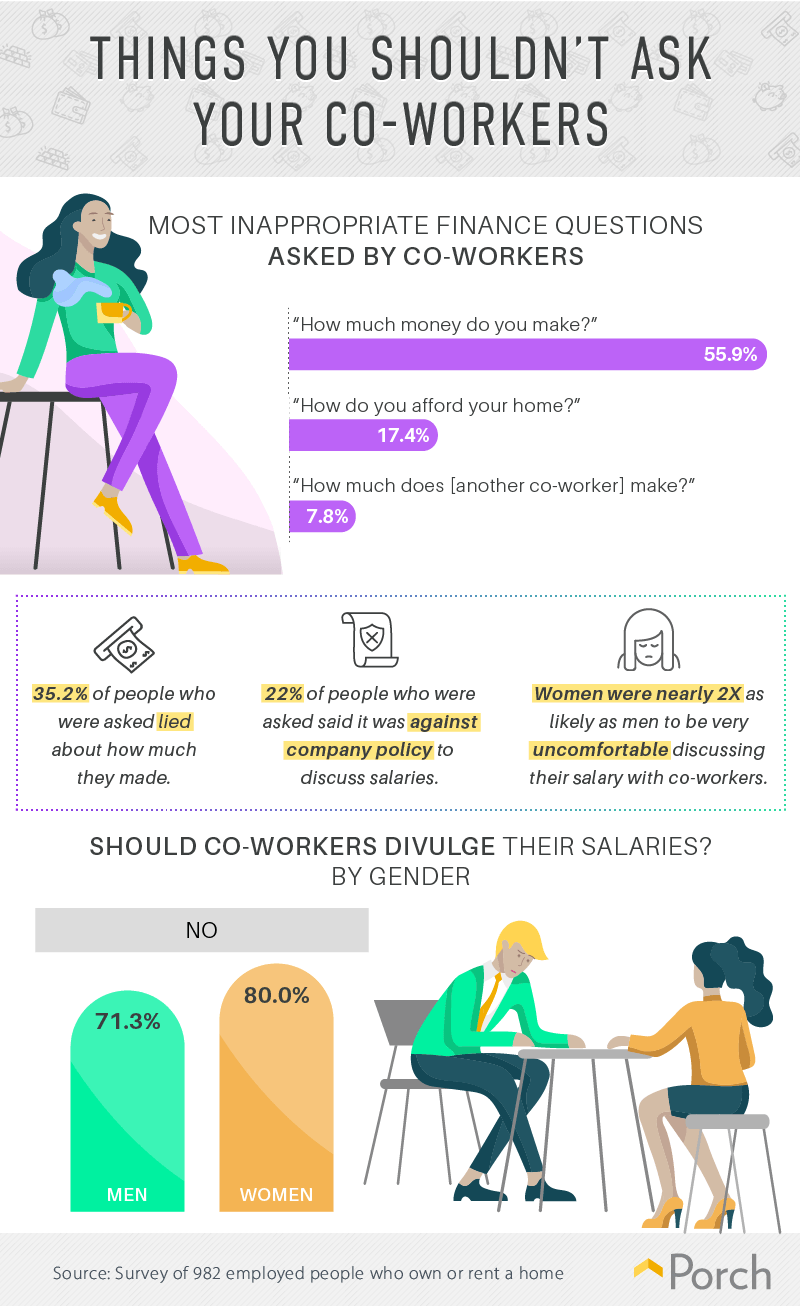 It’s no secret that your salary is supposed to be, well, a secret. Discussing money with co-workers can be awkward, especially if there is a large discrepancy in paychecks. However, despite some companies prohibiting it, discussing salaries with co-workers can actually make employees happier as well as improve the bottom line. Nevertheless, nearly 56 percent of people thought it was inappropriate to ask how much a co-worker makes, with women almost twice as likely as men to be very uncomfortable discussing their salary with co-workers.

Even when salary was brought up, over one-third of employees admitted to lying about how much they brought home, while 22 percent said it was against company policy to discuss. Seeing as money is a hush-hush topic, many people aren’t aware that pay secrecy policies—whether mandated or insinuated—are against labor laws.

But regardless of pressure from higher-ups, employees still don’t want to talk about money. While 71.3 percent of men said co-workers should not tell one another their wages, 80 percent of women said the same. Of course, this difference is likely due to the gender pay gap that still persists. Women may be more uncomfortable talking about money since they typically make less than their male counterparts, but pay transparency is the only way to truly know how large the gap is and take steps toward closing it.

When faced with an uncomfortable financial question, people are typically faced with two options: Answer honestly, or avoid it entirely. But which route they take seems to depend on their gender, age, and the person asking. Slightly over half of men said they answer questions about their finances, while nearly 60 percent of women said they divert the conversation.

The oldest generation we asked, on the other hand, seemed to be a bit more traditional when responding to financial questions. Thirty-eight percent of baby boomers said they would tell a friend they were uncomfortable talking about finances, while 36.5 percent would say the same to a co-worker.

The right kind of money talk

Broaching the subject of money is never easy, but it’s crucial to ask the right questions. Instead of asking a landlord to lower the rent, you’re better off asking about payment plans or even finding a location better suited to your budget. As for discussing finances with co-workers or friends, gauge the relationship first. While it might be best to squash the salary talk with a new hire or a co-worker you consider an acquaintance, someone who is more involved in your personal life will likely be more receptive to the discussion.

Regardless of the relationship, though, most people are keen on hearing about a good deal. Considering home renovations were perceived as an appropriate financial topic, it can’t hurt to tell your friends, family, or co-workers how much you saved on home improvements. At Porch, our goal is to help you find the best professional for the job while giving you a deal worth talking about. We’re your pro for everyday home projects. To learn more, visit us online today.

To collect the data shown above, we conducted a survey of 982 respondents. To qualify for this survey, respondents were required to own or rent their home and be employed. Of the 982 respondents, 217 were landlords. The respondent pool was 51.9 percent female, 48 percent male, and less than 1 percent who chose a different option. 324 were baby boomers, born between 1946 and 1964; 330 were Gen Xers, born between 1965 and 1980; and 328 were millennials, born between 1981 and 1997. Because the survey relies on self-reporting, issues such as telescoping and exaggeration can influence responses. An attention-check question was included in the survey to make sure respondents did not randomly answer.

Talking about money is clearly controversial, but sometimes, it’s necessary. Before broaching the subject, it’s vital to know what is and isn’t appropriate. Feel free to share our findings with your friends or followers. The graphics and content found here are available for noncommercial reuse. All we ask if that you link back to this page so that readers can get all the information and contributors receive proper credit.

Are you tired of living paycheck to paycheck? Sign up for A Richer You's free updates to learn how to earn more, save more, and invest more...

Search A Richer You

This article may include affiliate links. Review our advertising disclosure for more details.

Become A Richer You